The 10-km InterCity double-track railway project in southeastern Norway has recently started the production of Diaphragm walls (Dwalls) at the tunnel culvert at Carlberg worksite. Bane NOR is the client for the Sandbukta-Moss-Såstad (SMS 2A) project which runs through Moss municipality. 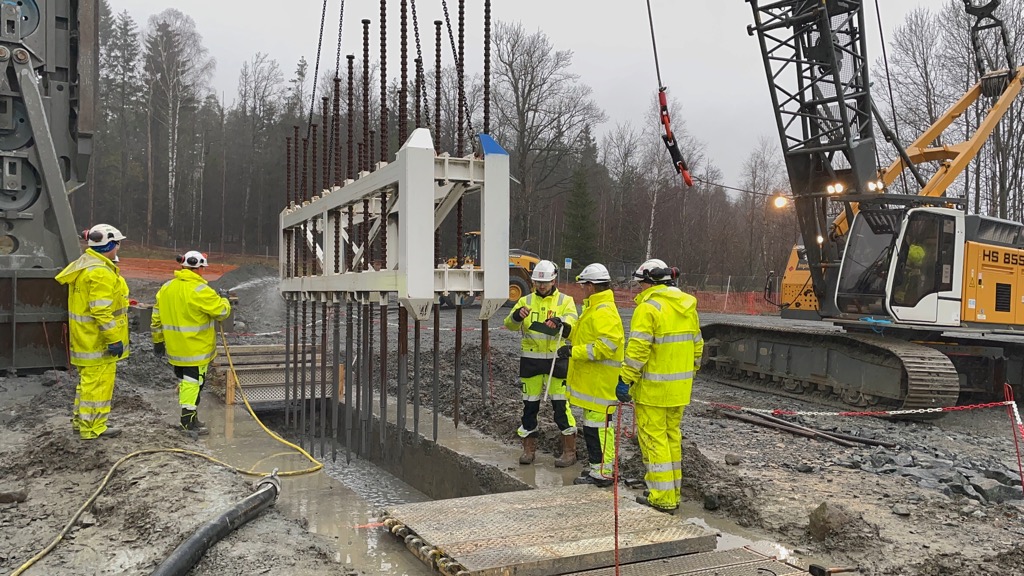 Diaphragm walls are a type of earth retaining structure used for culverts and deep excavations and are not commonly used in Norway. It is a reinforced concrete wall that is excavated and subsequently cast in sections or panels. During this process the trench is supported by a stabilizing fluid called bentonite.

In addition, MossIA is utilizing lime-cement piles and jet grouting to stabilize the ground around the culvert, between and on each side of the diaphragm wall .

Before MossIA started the actual production, two test panels have been conducted while monitoring the stability of the trench and the effect on the surrounding area. Only after having confirmed that no significant movement had occurred, was production started.

“Diaphragm wall production requires specialized equipment, expertise and craftmanship that MossIA now provides for the project in Moss. We are pleased to construct these retaining walls together with Bane NOR,” informed project director Ragnar Reitan.

The EPC contractor MossIA, a joint venture between Implenia Norge AS and ACCIONA, has long experience with the diaphragm wall methodology. Both parent companies have worked extensively in Germany and Spain where the method has been developed for more than 100 years.  Malaga airport and Barcelona Metrol station are two of several projects by ACCIONA using diaphragm walls. The historical building Alter Wall in Hamburg, involved construction by Implenia of an excavation pit with five basement levels by means of diaphragm walls.

“The method is widely used in Germany where I come from. Especially for deep pits such as metro stations where you have little space but have the need for solid reinforcement walls,” commented Site Engineer Simon Battenfeld.

Simon has worked in geotechnics for the past seven years and holds a Master Degree in geotechnical engineering from the University of Karlsruhe. He represents the next generation of diaphragm wall expertise that enhances the craft within the industry.

“When I completed my internship many years ago, I was lucky to be introduced to a project with diaphragm wall production. I decided to further delve into special foundation, engineering and particularly this method,” added Battenfeld. He said he also feels it represents the forefront of technical feasibility and sets the stage for the desired construction or building on the top.

The diaphragm walls for the Carlberg culvert consists of approximately six-meter-long excavation sections with a width of 1.2 meters. For the deepest areas of the project, the diaphragm walls will go down to approximately 30 meters. As excavating is progressing, the trench is filled with bentonite that stabilizes the walls of the excavated section. This is a special liquid that is thixotropic, which means that it acquires a firmer consistency when standing still – providing the required support – and becomes more liquid (less viscous) and workable when being stirred.

The construction process for each panel has the following stages: